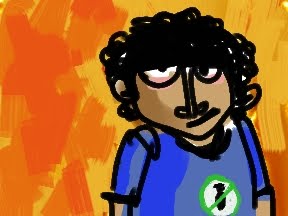 Life in the Government - Part II - Mythologies of Patriarchy

So I was watching this movie, last night - Hazaaron Khwaishein Aisi (Dir. Sudhir Mishra, starring Kay Kay Menon, Chitrangada Singh, Shiney Ahuja). You might have watched it. If you haven't, I recommend you do so. It's a nice movie, informing the viewer about what life was like for people from the upper, middle, and lower classes, during the tumultuous years of Indira Gandhi as Prime Minister of India.

The movie begins to pick up after Emergency is declared and all opposition party leaders are systematically arrested. That's when the director chooses to show the action happening in Bihari hinterland, especially in the district of Bhojpur.

I really like the handling of the character of the policemen in the film. I have rarely seen so accurate a depiction of district-level Indian policemen in film. There's this one scene in which the character of Chitrangada Singh, an adult literacy activist, confronts a policeman, probably a Sub-Inspector (SI), over a large number of villagers arrested in connection with a dead body that the police claim is one of theirs, murdered by Maoists from the village. The SI who is in the Police Station - his place of Power - after venting his rage on the lawyer for the villagers, sits upon his desk, his eyes upon Singh's breasts, slowly moving up to meet her eyes. 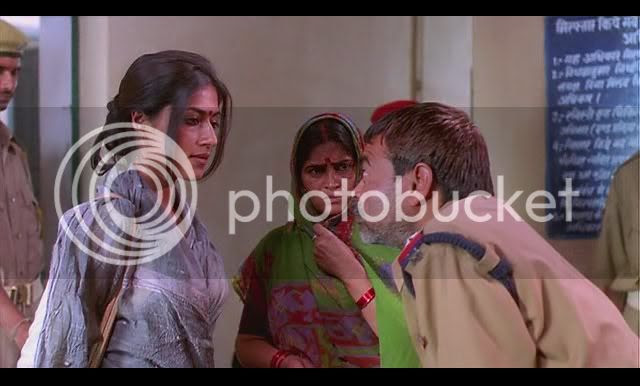 In that one movement, he seems to very effectively convey a supreme and total internalization of centuries of patriarchy.

This problem, you see, is not limited to just the police. The point I'd like to make here, is that in states of North India (note: I can write only about what I've seen for myself, so I'm not talking about the Southern states here, at all), the nearer one gets to the heartland, that is to say, the district towns and villages, the more one notices a distinct strain of patriarchal thought and action that seems to pervade the different levels of administration.

Here's a real-life example, something that happened to me:

A very senior officer in the District Administration here sat down in his stenographer's office and lit up a choti Gold Flake cigarette. I was there to look through some paperwork that had arrived the previous day from some departments in the district. The officer took a long drag and decided that he'd like to chat with me while he smoked. So he asked me, "Tum Bambai se ho, to tum Maratha hoge."
To which I responded with, "Main Marathi hoon, lekin main Tamil bhi hoon."
"Woh kaise?"
"Meri maa Tamil hai, aur mere father Marathi hain."
The officer smirked. "Nahi. Pata hai, tum galat ho."
"Woh kaise, sir?"
"Tumhari maa galat hai. Agar woh apne aap ko Tamil bolti hai, to yeh galat baat hai."
A self-satisfied look, and he continued.
"Hindu mythology mein, aurat ka koi jaat nahi hota. Shaadi ke baad, uska jaat apne husband ka jaat hota hai. Iska matlab hai, aap Maratha ho. Tamil nahin."
A man, passing by, was stopped by the officer and asked for his opinion about the matter. The senior officer's views were, of course, corroborated without hesitation. I realised, this wasn't a matter of seniority. That man, passing by, really did believe that men were superior to women, and that this 'fact' has its genesis in the Sacred Texts.

What's funny is, that senior officer spoke of Hindu 'mythology', and I can say, with complete assurance, that the man has never read - or for that matter, even heard of - Roland Barthes. Patriarchy, among so many other things, is sustained through mythologies that provide the structural framework for wisps of smoke to appear (and feel) as thick as concrete.

I'd like to write more about this, but I have to return to work now.
Maybe I'll update this post later.

Working within the structure of Indian government exposes one to a variety of experiences.
Since the 1st of May this year, I have:

When people meet you here and you tell them you're working with the government, their first reaction is to pull back a little. Why this is, I have yet to figure out. Then they'll ask you what your position is. Then, what do you get? I try to avoid revealing my specific pay by telling them that I'm in the pay-grade of a Class-I Officer and my position's that of a Lecturer in my Institute. But no, how much? Sometimes I tell the truth, sometimes I don't. Depending on how I'm feeling at the moment.

Often, I remember the book 'English, August' by Upamanyu Chatterjee. In the book (Spoiler Alert), Agastya Sen, a newly recruited IAS Officer is posted to a sleepy town in Northern India, called 'Madna'. With a predilection for marijuana, he is thrilled to see the plant growing wild in the environs of the town. This is his first experience, navigating the corridors and halls (with paan-stained walls) of 'Sarkar' or 'Power' that is the Government or the District Administration.

Agastya (or August, as called by his friends from his school) meets the Deputy Commissioner / Collector / District Magistrate and experiences what it means to be an 'Officer', a babu-in-the-making. He gets accommodation in the Circuit House and encounters the staff there, eventually coming to terms with their attitude. If my memory serves me well, I think he is eventually made a Block Development Officer (BDO) and eventually works his way up to the position of District Collector.

Why am I writing about English, August? Because - and I say this without intending to sound presumptuous - I find parallels between the character's experiences (metropolitan city to small town, learning to speak Governmentese, etc.) and mine, over here.

Oh, I should mention, I'm working as a Research Officer with the Haryana Institute of Public Administration and I've been posted in a district named Sirsa, on the borders of Rajasthan and Punjab. It's a pleasant 40 degrees plus right now, and since my arrival here more than a month ago, I have ingested at least a few kilograms of sand. Yummy.

But it's almost 5 PM and the office I'm in will be closed for the day at 4:59 PM (I'm starting to believe, all those who work here have an internal clock. They just seem to know when closing time's near and the anticipation in the air is so thick, you could slice it with a knife). I'd better start winding up, lest I invite the wrath of the room's custodian for making him stay a few minutes longer.

* Bagdi is a dialect of the Hindi language, belonging to the Rajasthani tonal cluster
Posted by 'radegaps' at 4:54 PM No comments:

figures of speech
were well within reach-
alliteration too (but forsaken)

oh, the people
she wrote
some smitten
some smote
Spirits Free'd
into ironic chains 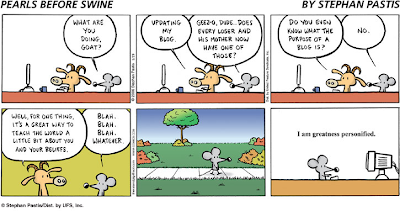 Photo of the Day at JEEVIKA

One of my photographs has been featured as 'Photo of the Day' on the JEEVIKA website :)

And don't forget to check out some of the excellent work the organisation has been doing.

Till the next post,
Posted by 'radegaps' at 2:27 PM No comments:

Now I'm feeling lonely. There isn't any one I can call up at this hour or any after this.
It would be great to have a fun conversation online if not over the phone.
There are people online but I don't feel like initiating conversation.
I will read a book. I was told recently there are no 'best friends', that the concept is a redundancy or something to that effect, perhaps in other words. To be fair, I was told that it was said individual's opinion and therefore does not by default apply to the concept in general.

Way I see it (this is my opinion), there are best friends. Books. It doesn't matter if it's 1:52 AM or 3:33 AM or 4:56 AM or corresponding PM's for that matter. I have always been and will always be able to read a book whenever I feel like it. And so long as there is a sufficient source of light, and as long as no one complains about the light, I can read for as long as I want to at night or early morning whatever you will.

Oh, it rained today. 12:24 AM by my estimate. Ran down two flights of stairs and out the building, loose pair of shorts notwithstanding. Turned my face up to the heavens. And I knew then why they called it the heavens. After the heat, the soothing cool. Farmers will be pleased. That is an understatement. Watch the documentary 'Nero's Guests' directed by Deepa Bhatia.You will understand.

I am going to read now.
'Tis by Frank McCourt.
'An Equal Music' is pending. I always do this. Always.

If you like me, get me a Kindle or an iPad.
But only If.

on the streets of Paharganj

liquor
cheap hotels
and lust and

I believe
redemption
is there

there is ice cream and
cigarettes and
more 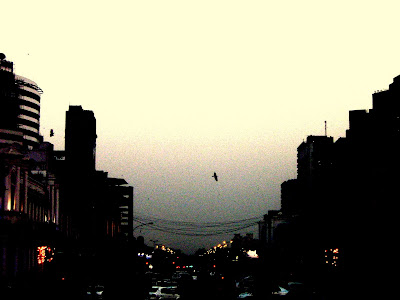 So it's been a while since my last blog post. I had another blog before this one. It was alright, not too bad, nothing great either. But I wrote a lot more there than I do here. and while I mostly post poems and the like here, I used to open up back there. Be frank. It's not hard for me to be open these days, but I'm not used to it, so writing something like this, though spontaneous, isn't easy.


I think it is time to take stock of my life over the last few months.
I think I've been slowing down a lot in the recent past. Getting sluggish. Getting complacent.
I have found that there is a difference between complacence and satisfaction. The difference is this - Satisfaction feels good and continues to feel good even after a while.
Complacence starts out with making you feel good, but its like a radioactive element with a short half-life. begins to decay and when it unravels - pardon the complete messing-up of scientific phraseology - suffice to say it doesn't give you a reason to smile.


I have been complacent. and I need to remedy that. but how? Maybe by finding things to do. I'm helping an old friend out with her grad. film and that's given me a day of something to do. I read books. so far so good.
Some content-writing here and there. a few hundred rupees are made thus. I don't have many friends, but considering my attitude towards friendship, that is not surprising. I don't make many efforts to maintain friendly relations with people around me - I do want people to keep in touch with me, but am not willing to do so myself.


what's one to do? we are who we are, eh? It's not that I don't try. It's just that my 'best' is too less for most people. so I don't bother too much anymore. call it Sour Grapes Syndrome if you like. Individuality!
My liege.


Even as I type this, I tire of it. Last night as I was returning from that old friend I mentioned's place, I stood by the roadside and watched the twinkling lights of the high-rise buildings about half a kilometer away from me. There was a full moon. Together, they seemed like a cold mother. This city brings out the worst in me, and that, my friends, if channelized right, might just bring out the best.

James Morrison
Posted by 'radegaps' at 3:27 PM No comments: